Chris made this plot from two observing sessions of Jupiter. The first involved approx. 100 imags while the second (green) involved approx 1700 images. 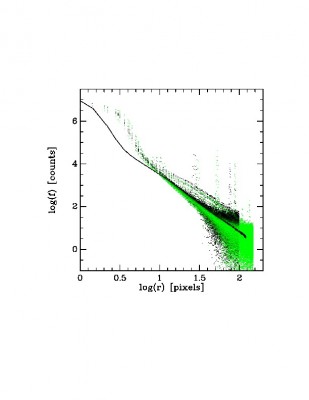 Comments from Chris: The plot shows the psf around Jupiter. About
200 x 0.1 second exposures were averaged (black dots) and about 1700 a
few weeks later (green dots). T

Note well: the background level of the sky has been adjusted be a small
amount — by not more than the uncertainty in the sky itself — to allow
the points at large to fall off with the same power law out to 100
pixels.

The power law fall off of the PSF is ~ r^-3 in the outer regions.

Signs of the non-axisymmetric psf are seen as extra dots above the main
sequence of dots. This is mainly caused by shutter bounce, leaving a smear of photons to the right in the psf.

The clusters of points at particular radii and sticking up are the Galilean
satellites.

The black line shows our current (Sept 29, 2011) best estimate of the psf from forward scattering of ideal lunar images and fitting them to lunar observations. It’s very close to the Jupiter PSF at large radii. This is the reason we think the
psf is falling as a power law all the way to the edge of the frame.

The departure of the inner part of the PSF around Jupiter from the black line is caused by the finite size of Jupiter — about 6 pixels across.

The inner part of the PSF is still not measured anyway. We are working on this! 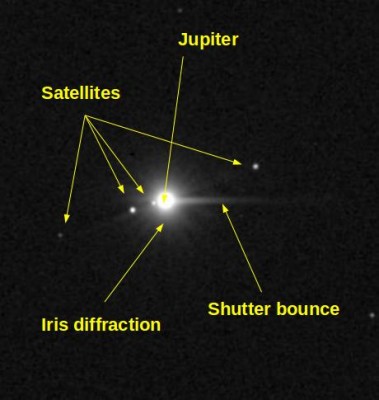