We rely on subtracting ‘smooth scaled superbias’ fields from science frames, because of the 20-minute thermostat-oscillation in the bias mean, and a wish to avoid adding noise by subtraction of noisy bias fields. We generate the scaling factor for the superbias by averaging the bias frames taken just before and after the science frame. We seem to be assuming that the bias mean does not change – or does not change irregularly – during this procedure. Let us examine that assumption.

We take most bias frames as single frames, but happen to have 50-image stacks here:

We calculate the average of each subimage in these stacks and plot the results: 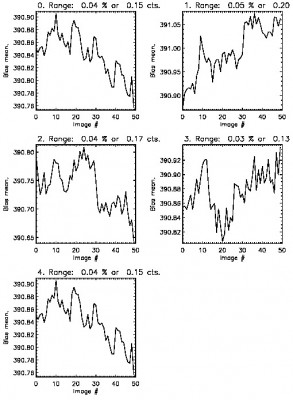 The camera can take many images per second in ‘kinetic mode’ so the above sequence last something like 10 seconds each. There is evidently some slight trend during that time – at the 0.05% (or 0.15 counts) level compared to the bias mean. This may not seem much, but if the scaled superbias mean is wrong by 0.15 cts it can mean an error on the DS flux of many percent – because the DS fluxes we are using are at anything from near 1 count above sky to maybe 10 counts above sky. For a DS at 1 count the 0.15 count error is 15% while it is 1.5% for the 10-count DS. This is quite serious.

It may be the reason that the halo-removing methods based on ‘subtracting a model halo’ did not work well – they relied on the bias being correctly subtracted previously. The ‘profile fitting method’ apparently worked better and this is probably because it inherently contains a fit to the sky (and thus bias, and also any insufficiently subtracted, bias).

Bias subtraction does more than subtract a mean level, of course – there is also some structure – notably a 0.2 count raised edge along the vertical sides, stretching some 10% into the field. Some row asymmetry is also evident, along with a very slight ‘ripple’ in the column direction (Henriette’s thesis has all this).

Subtracting the scaled superbias is therefore mostly a good thing, but it should be realised that important level-errors may be present causing blind reliance on the ‘complete bias removal’ to be dangerous – better to allow for an additional small pedestal in your modelling.