After exhaustive (-ing?) tests of fitting the same image over and over again under varying conditions, we now turn to fitting all images in two colours from one night. We take B and V images from JD2456045.

We have before fitted ‘lines’ going from DS sky onto the DS disc itself, and then moved on to another position along the DS edge. Thsi helped us see that fits along the edge could vary systematically, and we have speculated that it was due to the BRDF-model used had some azimuthal angle-dependence that was different from reality.

Instead of getting several fits along the edge and combining these, we now choose to combine lines and make one fit, thus allowing the errors to balance out somewhat.

The upper panel shows 11 concatenated ‘lines’ going from 50 pixels off the DS edge to 70 pixels onto the disc. The white curve is observations and the red is the model. The lower panel shows the difference between the two at ‘best fit’.

We have 8 parameters in the model that together describe such things as the terrestrial albedo (the main goal of the exercise) and parameters that adjust the PSF, as well as the relative alignment of model and observed image.

We smooth the concatenated lines (and corresponding model line) before fitting – this helps reduce a problem we had before, namely, that repeated fits of the same image starting at slightly diffeent (1% different) starting guesses could finish up at slightly different ‘best fits’.

For all images in B and V for one night we can compatre the various quantities determined in the fitting: 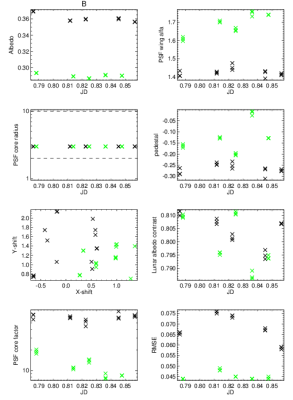 From top to bottom, left to right: Albedos in B and V images against time of day (not really Julian Day, but fraction of day since that JD started); alfa of PSF wings against time; PSF core radius (here held fixed at 3 pixels); pedestal against time; image shifts in X and Y; lunar albedo contrast factor; PSF core factor; and RMSE against time. Black crosses are B-band, while green crosses are for the V-band.

Here we see a clear difference in B and V albedo, with some scatter. The PSF is behaving diffrently in B and V (core factor, pedestal and wing alfa). Lunar albedo amp contrast factor is unaffected by B and V. RMSE is bigger for B than for V. Image shifts are near 1 pixel in each idrection.

The above choice of a fixed core radius was prompted by noting that leaving it free to vary inside the range 2-10 would cause the fit to pin the core radius to the lower limit in V and the uppe rlimit in B. We argued that some of the factors core radius/core factor/ andpedestal were degenerate and chose to fix the core radius at a compromise value. We note the extreme values of the core factor parameter for B, compared to V. In essence, a large core factor implies that most of the flux is in the core of the PSF and little is in the wings. It is hard to say if this is what we expect for B vs V – the colour-dependence of light-scattering in optics (and atmosphere) is not understood by us. Yet.

The observations in B and V were not obtained at the same times (because we use filter-wheels) so it is not easy to combine the B and V albedo determinations. Some of the scatter seems to be correlated (first points in left top panel above), but the rest do not. The means and standard deviations and standard deviations of the means, and the SD in percent of the mean, for B and V are:

So we have scatter on albedo determinations of near 1%, like BBSO. Formal errors on the determination of albedo for a single image depend on being able to estimate the uncertainty of the data. As we clearly have some systematics going on (plot at top of this entry) this is not possible.

The B and V here are ALBEDOS, not magnitudes. Converted to magnitudes the Balbed/Valbedo ratios on the two nights have Johnson B-V colours that differ from one night to the other by 0.06 mags.

Thus we are told that one night’s earthlight was 0.06 mags bluer than the other. This is several times our estimated observing precision.