In this post Chris showed that the night of 2455945.1xxx has halos, in B and V, that seem to be at a constant distance across the DS. This implies that the ‘gradient problem’ is absent on this night – perhaps because the night was very clear or the haloes in B and V almost identical. [Inspection of the ‘alfa’ for the profiles shows that V images had alfa in the range 1.547–1.549 while B images had alfa in the range 1.544–1.547. These values seem close but halo shape is very sensitive to alfa, so analyze first!]. It is possible to generate a B-V image for this night using the only good images for B and V (in the sense of ‘being on Chris list of good images’, as explained elsewhere). We used one B and one V image:

both bias subtracted but not flat-fielded. Exposure times were taken from the image headers.

This is the result: 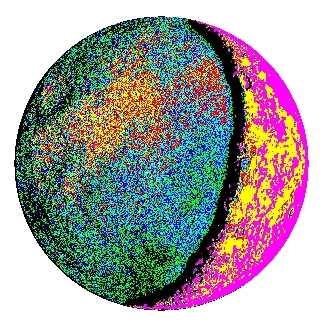 The colours are of course chosen arbitrarily, to aid excitement and imagination! For this image we corrected for extinction using

and calculated B and V images from the B and V instrumental images, in an iterative manner:

Here, ‘idx’ is a pointer that selects for all pixels on the lunar disc – both DS and BS.
Vonvergence was swift and independent of initial value. Convergence was to B-V=0.925.

A plot of a ‘slice’a cross the disc above is here: 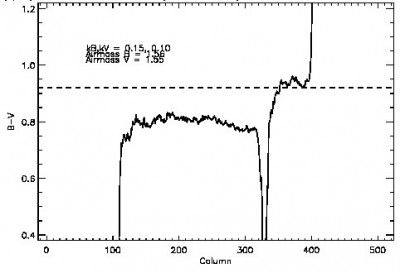 The colour image reveals some structure on the DS. It seems we see a faint flatf ield pattern? This should be looked at. On the BS colour differences eem to be lunar in origin and coul dbe compared to the literature on this subject.

The deep ‘cut’ in the middle is due to some small-distance difference in the B and V halos, we think.

Until we are told otherwise we think this is the first map or image showing the colour of the Dark Side of the Moon, which is also an album by Pink Floyd.

Images in other colours may be fothcoming.

Another version of the image above, here with a legend is here: 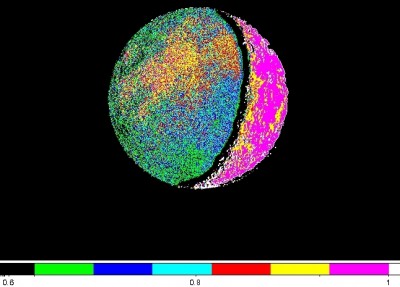 On the night of JD2455945.1ish the Earth was iilluminated over South America and shone on the Moon. Seen from the Moon the Earth looked like this, from the Fourmilab Earth Viewer: 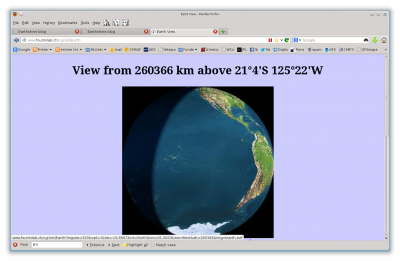 So, mainly Pacific Ocean but also also all of South America. Need some satellite images of this to see how the clouds were distributed!

Note added later: The (far) above is unfortunately quite sensitive to how well the images are aligned. This needs to be looked at before anything else.

Here is a nice link to images of the
colour of the Moon obtained in sunshine and with simple DSLR cameras –
i.e. jpeg files: http://www.datarescue.com/life/kepler/moontests/raw_vs_jpeg.html