In this post: http://iloapp.thejll.com/blog/earthshine?Home&post=293 I proposed to fit more elaborate PSFs than we have been using.

I present here the results of fitting a 2-parameter PSF. The previous one was characterized by an exponent alfa, and had the form

The new one allows two exponents – one regulating the slope of the PSF up to a cutioff point in terms of radius, and the other parameter taking over outside that point. Thus we have 2 new parameters to fit – exponent and cutoff point.

Using such a PSF and evaluating success on the parts of the image designated by the mask – and using a mask consisting of sky on both sides of the Moon, but no polar areas – i.e. a ‘belt across the image’ – we arrive at images with slight changes in the estimated halo on the DS of the Moon and larger changes in the area on teh BS-sky.

This plot summarizes what was found: 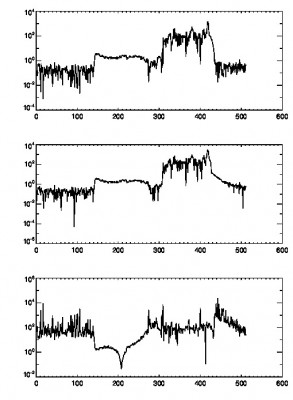 The top panel shows absolute value of residuals (obs-EFM-model) in a slice across an image after the halo has been removed (along with most of the BS, as is always the case in the EFM method). The PSF used was the new tow-parameter PSF.
The middle panel shows the result when the usual one-parameter PSF has been used.
The last panel shows the difference between the two panels, expressed as a percentage of the first one. The illegible y-axis label for the bottom panel shows 10^-2 at the bottom, next label is at 10^0.

Note that absolute values of residuals are plotted above.

We see the DS to the left, the almost-erased BS to the right and the sky on either sides.
Clearly, the BS sky has been removed much better in the first image – i.e. with the two-parameter PSF. On the DS we see changes in the range from 1 to a few percent on the sky-ward part, rising to tens of percent near the BS.

We need to know if there has been an improvement on the part of the image that matters – the DS!

The best fitted parameters were quite alike – near alfa=1.7. The best-fit cutoff point was near 30 pixels.