Showcase images and animations Posted by Peter ThejllPosted on Dec 13, 2012 10:06

In this – uipdated – posting we combine more images from JD2456034 – we construct B-V images in various ways.
The discussion refers to Chris’ originalposting:
http://iloapp.thejll.com/blog/earthshine?Home&post=275

The first images we look at are not the bias-reduced images Chris uses, but ‘EFM-cleaned’ images (i.e. scattered light has been removed). Both the B and V image used were co-additions of 100 images each. The two images were centered in the image frame. We look at tow sets of B and V images – the one at the top is cleaned with one setting of the EFM method; and the one below is done with another setting of the EFM method. Some of the features to the left on the sky are the effect of ‘cyclical overlap’ from the right side when the image is shifted.

Here is a ‘slice’ across the middle of the upper image: 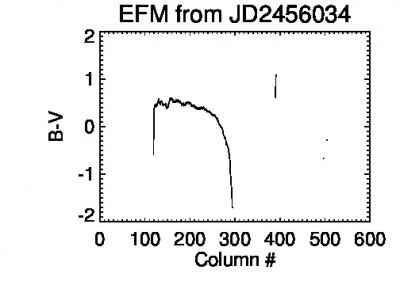 And here is the same slice across the lower image: 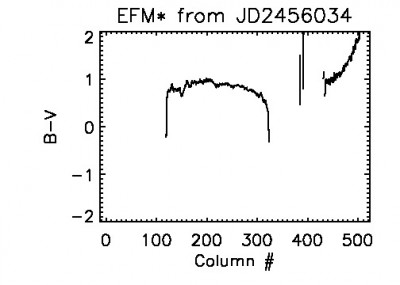 And finally, here is the slice across the un-reduced B-V image – that is, the image formed from B and V images calculated from the images that were only boas-reduced (as in Chris’ plot). 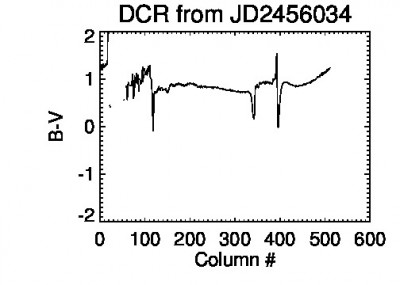 The uppermost image has a large ‘dip’ when we get near the BS and its halo remnant . In the middle image the halo has apparently been better removed. STrangely, thereis least sign of a halo in the ‘raw’ images where nothing has been done to remove the ahlo. This needs to be discussed!

We used other airmasses than Chris. In my calculations the airmasses for the two images involved are:

I did not solve for B and V by solving two equations with two unknowns – I iterated. Convergence was fast. I iterated on the whole images.

The first of the above EFM cleanups was done with a weighting of the mask used to define the area of the sky on which to reduce the sum of squares that favored the DS part of the sky. In the second attempt above equal weight was given to the RH and LH sides.