Andor camera field experiences Posted by Peter ThejllPosted on May 18, 2012 11:42

We have seen that the relationship between signal variance and signal is not linear. This may be worrysome for us, but it is not really the non-linearity we originally feared. We would be in great trouble if signal level was not a linear function of incident intensity. In the body of data generated to show the variance-vs-level nonlinearity we also have the material to test whether level rises proportionally with exposure time. Of course, we do not really trust the shutter – it sticks and is variable at times – and we have no way to vary intensity of our lamps, but we start by inspecting the signal vs exposure time relationship in the V filter: 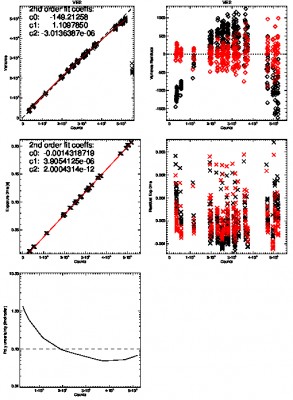 From top left to bottom: Box 1: same as shown before – variance vs signal strength. Box 2: residuals after linear and 2nd order (red) fits have been subtracted. Box 3: signal level against nominal exposure time with 2nd order polynomial fit shown in red. Box 4: residuals from Box 3 when linear and 2nd order fits are subtracted. Box 4: same as shown before – nominal uncertainty on the parabola fit seen in Box 1.Inspecting the above plot in Box 3 we see that the signal level rises remarkably linearly as a function of nominal exposure time. Now, it could be that the exposure time is all wrong (we only have the time we ask for, not the time we actually get) but it seems unlikely that the linear relationship should arise by chance. The 2nd order coefficient shown in Box 3 is very small compared to the one in Box 1 – the signal-exposure time relationship is more linear than is the variance-signal strength relationship. It thus seems that electrons are not lost in whatever process causes the flattening out of the variance at high signal levels and it has been suggested in the literature that electrons migrate to neighbouring less-filled pixels. Thereby total signal is conserved but bright areas tend to blur into the darker neighbouring areas.If this is what happens we also have to think about the consequences of this – we must think of using DS/BS analysis methods that avoid using small bright regions for reference. This was at one point the core in the EFM method – the model of the observed image was constrained to pass through a region on the BS selected by the user – and often we chose the brightest parts near crater Tycho. This is now no longer used in the EFM – we now use a flux-conservation constraint to scale the model image. This would seem to be rather safe in the current situation.Eventually the DS/BS ratios need to be converted to albedo and this step is influenced by the choice of reference areas – something BBSO also must worry about in their reductions, but have not discussed.