Knife edge due to a house

Observed the full moon with a Canon 35 mm camera, eclipsed by a “sharp edge” (the front balcony of our house) and then moved the camera so that the Moon appeared from behind the edge and imaged it again. The moon was about 45 degrees above the horizon on a very clear sky. Sector was chosen to avoid the gum trees seen lower left 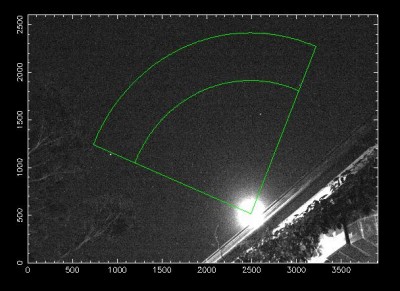 Image above is the UNECLIPSED moon close to but detached from the edge of the house. The radial profile was measured in the inner region of the sector shown, with the outer region defining the background sky for subtraction. 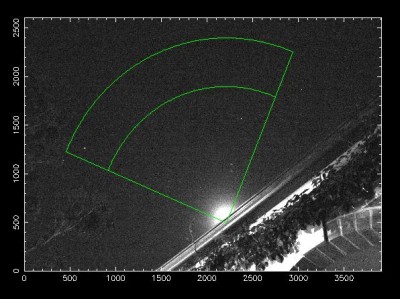 Image above shows the light from the moon, now placed just behind the roof’s edge. The radial profile was measured in a similar manner as before.

The idea is to test if the scattered light far from the moon is the same in both cases, i.e. is mainly due to the atmosphere.

The result is that it does indeed seem to be due to the atmosphere — the light falls off as a log-log power law exactly the same and, for two images with the same exposure time, the falloff has the same surface brightness on the sky. 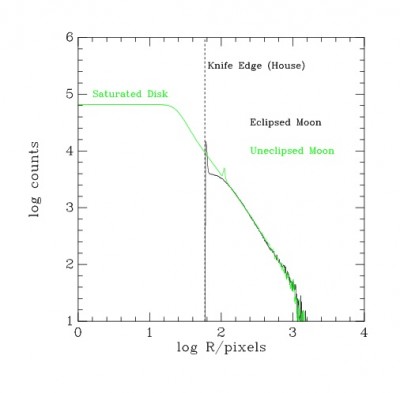 The falloff at large R (> log(R)=2.1, or about 125 pixels (1 pixel is about 1 arcminute) is exactly the same in the two cases, going out to more than 1000 arcmin (15 degrees). There is some funny behaviour near the knife edge, with some missing light in the eclipsed profile relative to the uneclipsed one, but it was very difficult to estimate where the center of the moon was behind the knife edge — since the moon is eclipsed — and the behaviour is quite sensitive to the moon’s position. Tried to figure out where the moon was using stars in the background, but the field distortions in the 35mm lens were too severe to model with a handful of stars.

If we try this again it would be better to leave the camera fixed and wait for the
Earth to turn and eclipse the moon, rather than moving the camera. A sequence of images as the moon approaches the knife edge might make modeling where the moon ends up behind it easier.

4 Replies to “Knife edge due to a house”