We have the unique B and V images from JD2455945.17xxx in which the ‘halo’ cancels almost perfectly, allowing us to see the colour of the DS. At the time of observation we can ask what the Earth was like. Here is the image generated from the Earth Viewer at Forumilab ( http://www.fourmilab.ch/cgi-bin/Earth ):

Above is the model image of Earth seeen from the Moon at the time /Jan 18 2012, about 1600 UTC) of our observations. Below is imagery from the GOES West satellite. There are also GOES images from 12 UTC and 18 UTC, the above one is from 15UTC and is the closest in time.

Evidently the Moon and the GOES satellite were not in line as the aspect is slightly different but we get the idea: Southern Ocean and Antarctica was white with cloud and ice, North and South America were partially cloudy, and the sunglint was on ocean off the coast of Peru, approximately.

Here is a simple model image, 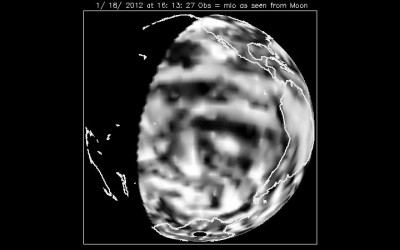 as if seen from the Moon at the relevant time. The image is generated from geometry and the ‘NCEP reanalysis cloud product’. You notice some similaririties in cloud cover between the satellite image above and this model image. The model only does the perspective projection of pixels onto a sphere – there is no modelling of limb brightening or anything like that.

The images does allow a simple analysis of the effects of various extreme values for land albedo, and used for two assumed wavelength bands could be used to set limits on what we expect the colour of the earthshine to be at this particular time. More to follow!