Meteor caught in the act!

During processing a strange signal was found in a frame combined from 100 images. It turns out that in one image of this stack we have what appears to be a meteor or a satellite flash – or something: 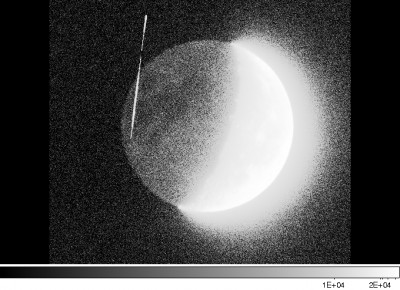 What is it? Well – it is clearly between us and the Moon! If it is a meteor its height would be something like 50-100 km. The speed would then be 35 – 70 km/s. A satellite in low earth orbit has speed 8 km/s. Since the image is taken from Hawaii at UTC 13:28 it is near midnight on Hawaii – i.e. the Sun is behind the Earth and unlikely to be illuminating a LEO satellite.

An airplane flies at 800 km/hr at altitude 10 km, so the distance covered in 0.009 s is 2 m which would subtend an angle of 1 arc minute. This is no airplane – or it is much closer, in which case we should see details of the plane.

As far as I can tell there is no pronounced peak in meteorite activity in January.