Stability of imaging in rapid sequence

Our standard practice to date has been to take 100 exposures of the moon, each with an exposure time of 10 to 40 milliseconds, depending on the brightness of the moon. The exposure time is set so that the bright side attains about 50,000 counts maximum, in order to get good signal but not risk overexposure (saturation of the CCD wells).

We have looked at the differences between successive images in these 100 image stacks. A good night with a fullish moon was chosen (JD2456106)

and the relative difference between the first 50 consecutive pairs of images in the stack computed, and made into a movie — here

(this can be viewed with mplayer in linux)

An example of nine consecutive frames is shown below : 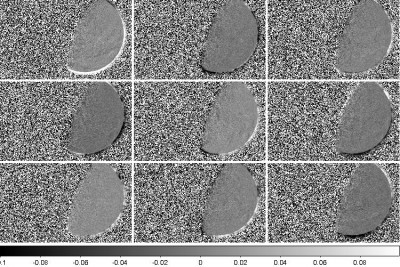 During the sequence of 50 exposures in the movie, the moon only moves about 1 pixel down and 1 pixel to the left, so drift in the position of the moon from one frame to the next is practically negligible.

White and black on the grey scale run from a -10% to a 10% difference with the previous image. Note that the two compared frames are normalised to the same total flux (this is typically a correction of ~1%).

We see plenty of structure in the difference image, which we interpret as being due to air cells — turbulence — above the telescope. The telescope size (3cm) and short exposure times (20 ms) mean that scintillation is very significant (because of the turbulence). In tests on bright stars with our telescope and 10 ms exposures, we were getting scintillation fluctuations in the fluxes of order 50% — very large — as one would expect (Dravins et al 1997a) (paper attached below).

Some of the structures look greatly elongated, and remind us of the “flying shadows” discussed by Dravins et al 1998 (paper attached below). To quote them : “Atmospheric turbulence causes “flying shadows” on the ground, and intensity fluctuations occur both because this pattern is carried by winds and is intrinsically changing”.