We can reduce our observations to a number that is equal to the ‘Lambertian albedo of Earth’ at the moment of observation. That is, for a sphere behaving like a Lambertian sphere we can find the single-scattering albedo that gives the same earthshine intensity as we observe. This takes phases and all relevant time-dependent distances into account.

In order to understand if the data we get are realistic we wish to compare to satellite images of the Earth. From work published by others [the Bender paper] we are told that the terrestrial albedo varies by many percent from pentad [avg, over 5 days] to pentad.

Many of the best observations we have have ‘sunglint coordinates’ over South-East Asia. One geostationary satellite hanging over that spot is the Japaneese ‘MTSAT’. We may be able to get data from it, but have only ready access to a Meteosat that hangs over the Indian Ocean.

From the Indian Ocean Meteosat we have extracted a series of images for a given day, in order to start to understand what sort of variability we shall expect on time-scales that are shorter than a pentad.

We have access to half-hourly images from the satellite and have 12 hours of data – 25 images. We take the average of each image and plot it: 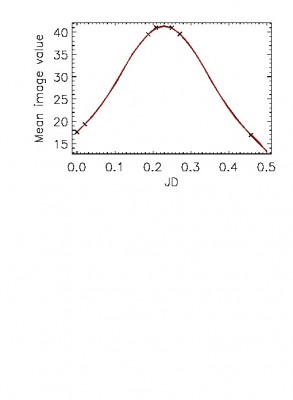 The large-scale behavior of the black curve is due to the phase – we see half a day pass as seen from the satellite so Earth changes phase from new to full to new again. Variations over and above that would be due to changes in earth’s reflectivity. There is a pronounced sunglint in the Arabian Sea near Noon.

Some pixels in the image are saturated.

It seems that the presence of a sunglint for some of the frames (the sunglint moves on to land – Horn of Africa – in the local afternoon and does not ‘glint’ in the sea anymore) does not generate a ‘spike’ of any kind in the average brightness.

We should remember:
That average brightness is not the same as albedo since the brightness depends on albedo times a reflectance function. But most of the reflectance behavior is removed via the polynomial fit, we think.
That cloud-patterns on this scale hardly vary much.
We do not yet fully understand the processing of the satellite images – are they normalized somehow? Were they all taken with the same exposure time?

So?
On this day at least variability in the albedo was much less than 1%.
We should inspect several days of images to see if the average level differs much from day to day.
We should try to get information from MTSAT, and at higher cadence – we can observe the earthshine with minute spacing.
Try to get more technical information about the satellite images.