We have, below, studied the ‘structures’ or ‘bands’ that, in some images, stretch from side to side. One concern was that the structure was induced by some step in image reductions. We therefore compare raw images to EFM-cleaned images to see if the structure is present in both.

Visual inspection of histogram-equalized versions of raw and EFM versions of the images reveals the structure, although it is easier to see in the EFM image since the halo and most of the BS is gone:

Plotting the average of the first 20 columns of each image, and scaling them to each other shows that the structure better: 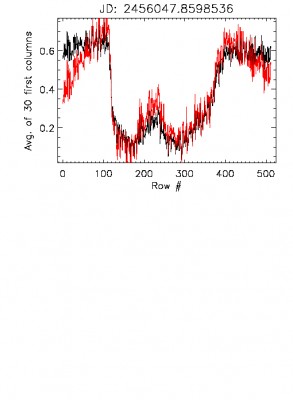 This seems to rule out that the ‘structures’ are induced by image-reduction steps.

We remain suspicious of the possibility that the bright light from the BS itself somehow is causing the problem. It is not a reflection since the structure is a deficiency of counts. Only way to explain it is by some process subtracting counts from these bands – or lowering the sensitivity of the whole set of bands – perhaps some sort of non-linearity caused by strong light in one part of the CCD affecting the whole row?

We still need to map when the structures is present – we want to see if it appears in a timeline or is a function of the placement of the image in the frame. Inspecting the first 700 images of 2000 for the EFM frames shows no sudden dependency on time of this problem.

Idea: also extract the maximum counts of the image and use this as a parameter – we do have suspicions that non-linearity sets in far below 55.000 counts.

Question: Why is the structure along rows, while readout direction is along columns? What is special, in a CCD chip, about the rows?