Identifying the best of the data

We have been using the apparent magnitude of the moon compared to the JPL model of its expected magnitude (V band), to check which images suffer from gross problems, such as an incorrect filter in the beam, or light losses from thin cloud, or other reasons. This follows up on previous posts (http://earthshine.thejll.com/#post256, http://earthshine.thejll.com/#post254).

This plot shows the difference between the measured apparent V magnitude of the moon and the JPL magnitude (i.e the difference between instrumental and true magnitude) as a function of airmass. There are about 5000 frames, mainly of averaged data (i.e. up to 100 images averaged together) in the total data set (as of November 2012), of which about 1000 are in the V band, and plotted here. 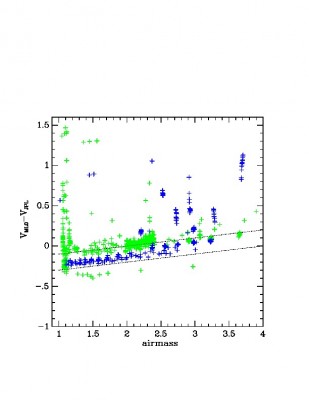 (a pdf version is also available).

Blue represents one side of the moon (the side with Mare Crisium), green the other side. Opposite sides of the moon have differing distributions of uplands and mare, leading to about a 0.15 magnitude offset between the reflected light and the JPL model (which implicitly assumes a uniform disc). The dotted lines show the expected trend with airmass for an adopted 0.1 magnitudes/airmass extinction — quite close to what we are seeing in the data. There is a lot of structure in this diagram!

To clarify which side of the moon is which: the next plot shows the Crisium side illuminated by sunlight:

This plot shows the Grimaldi side being illuminated. 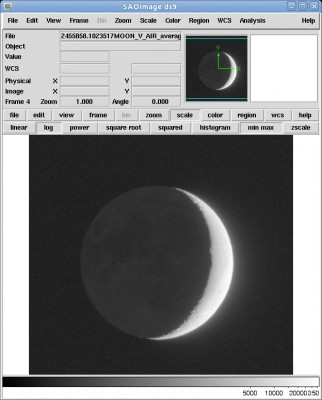 Now we concentrate on the crescent light on the Crisium Mare side (blue points in the plot): 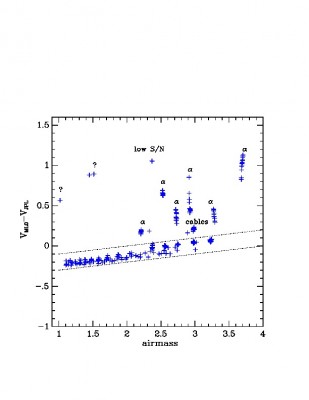 Concentrating on just this side of the moon, we see a very tight (extinction) relationship with airmass, with notable outliers. They are all on the dim side of the relationship — indicating loss of light relative to the JPL magnitude). The reason for most of these has been identified — most often because of thin cirrus or haze (this affects the scattered light around the bright side of the moon, which we model with a power law with slope “alpha” — these are indicated on the plot with that symbol. The moon went behind the tower and cables on the western horizon in one case “cables” and one image has low S/N. Two have “?” — no reason was found for these outliers, so they are simply dropped. This leaves us with a nice looking sequence of data for this side of the moon. I’ll look into these further as there may still be structure in there as a function of lunar phase.

The other side of the moon, the side with Grimaldi and extensive Mare, shows much less clear trends with airmass than the other side. 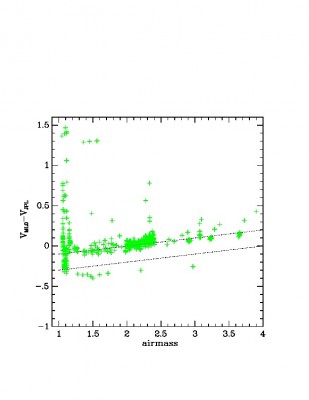 The dotted lines are the same as in the previous figure — they bracket the good data on the Crisium side. Strange things are happening at low airmass (z<1.2) – it turned out that most of these peculiar data are from a single night (JD2455912) as the next figure shows (background of these points shown in blue). Note the airmass scale has changed to make these points easier to see. 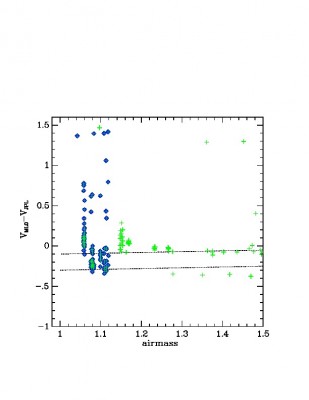 The entire night of JD2455912 seems to be a dud — as similar strange happenings show up in the other filters — VE1, VE2, IRCUT (but not clearly in B, as only one good B image was taken on that particular night).

Analysis of the remaining (grossly) discrepant points shows that they are often all on a single night. The next plot shows some of these problem nights: 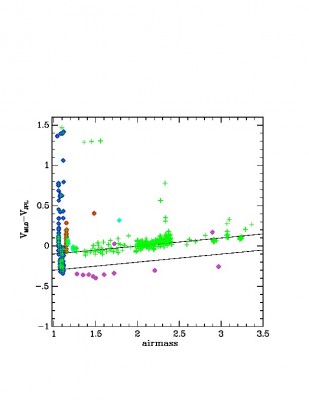 The bulk of the green points lie along the expected extinction line, with an offset relative to the other side of the moon (Crisium) of about 0.15 mag. We can bracket these data and use them for the ongoing analysis of earthshine. We look at this in the remainder of this post.

The next plot shows both sides of the moon in green and blue crosses, but for all filters (instrumental magnitude – JPL V-magnitude) as a function of airmass. No data have been dropped yet — it’s all the nights we have. 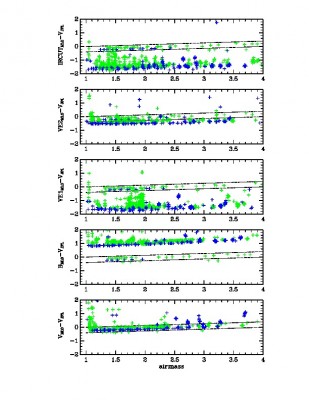 The colour of the moon in the various bands shows up nicely as an offset relative to JPL V-magnitude (e.g. B-V is of order 0.9, second panel from bottom). The Crisium side of the moon shows much cleaner results than the Grimaldi side, in all colours. The dotted lines bracket the good Grimaldi data, and are the same in all panels. Data which appears between these two lines in other bands then V, mean that the V filter was actually in the beam, not the nominated filter. There may be similar effects for all filter combinations, but for the moment we can only pick out misfirings which resulted in the V-filter being in the beam. Only a small fraction of the data seem to be so affected, which is very good.

Extinction depends on the wavelength of the filter : this is clearly seen as differing slopes in the zeropoint (ie. the difference between instrumental and true (JPL) magnitude) with airmass.

Once the grossly erroneous observations/nights are cleared out of the data, the sequence of good data as a function of airmass can be picked off the plot (we call this tunneling).

Firstly, opposite sides of the moon are reduced to the same scale, by adding 0.05 mag to the magnitudes (in all bands, B, V, VE1, VE2, IRCUT) on the Crisium side, and subtracting 0.15 mag from the Grimaldi side photometry. This brings both sides onto more or less the same sequence with airmass. We then estimate (by eye) the extinction as a function of airmass in each filter. The results are:

Interestingly, the extinctions in IRCUT and VE1 are somewhat different, which we wouldn’t expect as the filters are ostensibly rather similar. We should look into this further. In any case, these extinctions allow us to define lines about 0.3 mag wide around each sequence for each filter and pick off the best data. The result is this diagram: 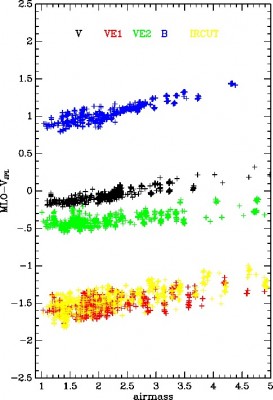 There are 3162 frames on this list — cut down from about 5000, so about 60% of the frames have survived the “tunneling” process. This is still a quite conservative list because I haven’t

1) checked for the Lunar centering,

2) checked for “alpha”, the scattered light parameter, except for those very obvious cases which showed up by eye.

Final plot: using just the good data, the extinction corrected apparent magnitudes at MLO are compared to the JPL model as a function of Lunar phase. The scatter is small in some of the filters — we are down to absolute photometry errors of just a ~ 0.1 mag relative to JPL, which is pretty good considering we cover a range of airmass mainly from 1 to 5, but with some of the data out to airmasses of 15! 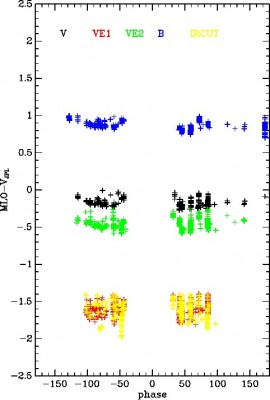 There is a hint we can do better still, because there is still structure as a function of phase — for example, the B band magnitudes at negative phase are a bit brighter still than the positive phases — indicating we didn’t get the correction for each side of the moon quite right. There are also trends in the reflected light with phase, but this probably reflects the fact that phase and airmass are somewhat correlated (small absolute phases tend to get observed at higher airmass, because the moon starts the night closer to the horizon).