For all our observations, we plot the lunar phase (in the convention we use) against the azimuth (degrees East of North) of that observations. 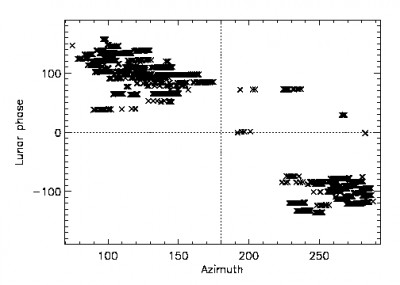 
A look at some first results: B and V

We look at the data from several nights in the phase-interval from -130 to -50 degrees (Full Moon is at 0 degrees; negative phases implies we are observing the Moon in the West (setting)): 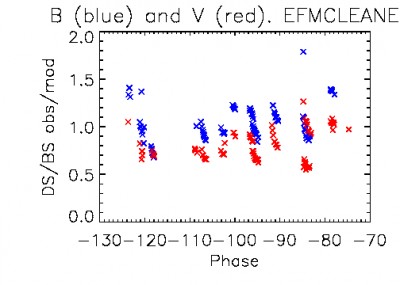 What we see are short sequences of points – each sequence covering one night. We note how many of these nightly sequences ‘dip’ during the progression of one night. We note the smoothness of each nightly sequnce – this bodes well for our original idea that albedo could be extracted with high precision. Jumps from night to night are more troublesome! But we need to first understand the ‘progression’.

Inspection of the time-stamps on the data in a ‘progression’ shows that time moves to the right – that is the ‘ratio’ plotted starts out high at a larger negative phase and ends as a lower ratio at a less negative phase (moves left to right). Since the observations are in the West we are looking at a setting Moon, or increasing airmass along a progression.

On a single night several things happen:
1) the Moon is seen through different airmasses, and
2) the Earth turns.
[recall that the synthetic models contain all the correct distances as functions of time, so effects due to that should divide out].

1) If the effect is due to the increasing (or decreasing) air mass we need to understand how a ratio of intensities taken from two areas on the Moon, obtained from the same image, can show a dependence on airmass. Differential extinction across the lunar disc? really? We are looking at 10-30% changes in a single progression!

2) Since these observations are all at negative phase they may all represent the same configuration of Earth and Moon – i.e. we could be seeing the effect of the same parts of the Earth rotating into view through the night. From a fixed observatory there is a tendency for the same areas on Earth to reflect light to the Moon on subsequent nights – in our case either the American sector and oceans on either side, or the Austral-Asian sector.

We should not forget 1 – but let us turn to 2 for now. We can extract ‘scenarios’ for the Earth at the moments of observation corresponding to the data-points above. Inspectingh the observing scenarios could perhaps teach us what is going on. 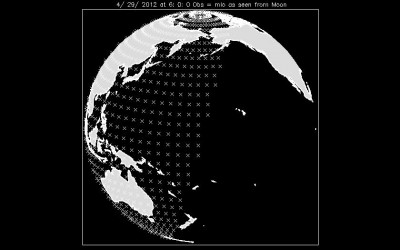 While this is the configuration at the end islike this: 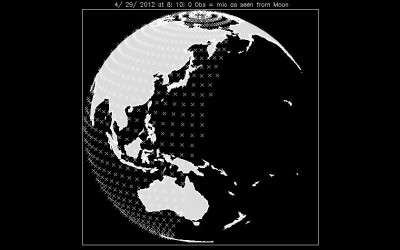 That is, the Earth has rotated slightly during the observations and
more of the Asian landmass has swung into view, meaning that more of the
earthshine is coming from the Asian landsmass, than at the start.

Can we estimate the expected change in Earth’s reflectivity during this sequence? Yes. We have quite elaborate code for that, know as “Emma’s code” due to a student who worked on it in Lund. It shows the Earth from any angle at any time, with superimposed albedo maps of clouds as well as continents. A reflectance law is imposed. I think there is even some Rayleigh scattering added to give the ‘bright edge’ of the Earth (see any Google Earth image at startup, as you zoom in – the edge is bright, and that may even be realistic).

That code is quite complex and is not run in a jiffy. [We need more students!] But we can make a perspective model of the Earth using simple IDL routines. We can wrap surface albedo and cloud maps onto a sphere and view it from the angle the Moon is at, for any given time. There is no reflectance imposed – just the albedo maps and the perspective view. The two situations above look like this with cloud maps for the moment of observations (taken from the NCEP reanalysis product TCDC): 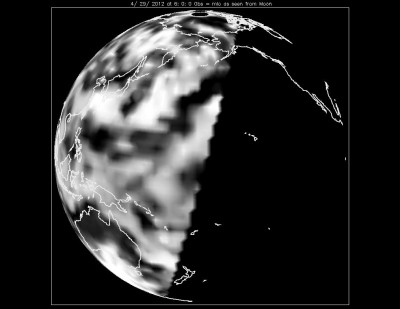 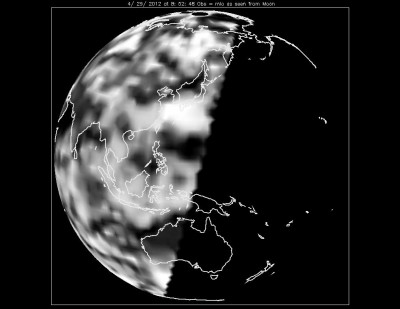 The simple average of the brightness of the two images above are 42.6 for the former and 40.6 for the latter – so it is getting dimmer by about 4% as time passes – perhaps because bright Australia (cloud-free at this time) is entering dusk. The cloud map images are available at 6 hourly intervals only, so there has not been time for the cloud image to change – it is simply rotated and other bits have become hidden by the day-night sector advancing.