The results for applying the linear BBSO scattered-light removal method to all data are further considered. Here we show data where the lunar disk is well centred and the radii extracted are between 131 and 149 (real range is 132-148) pixels. (Sorry about the image rotation!): 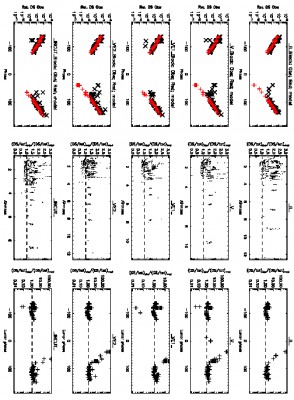 Rotate image and then use this caption: Results from comparing model images to observed images – models calculated for the observing moment but no halo generated. In the observations the halo has been attempted removed via the BBSO linear method. Column (1) DS counts to total counts for observation (black symbols) and same for Model in red symbols, against lunar phase; Column (2) observed DS to total ratio against airmass; (3) ratio of the DS/tot ratio for observation and models.Note that Full Moon is at 0 degrees phase.

We note that for lunar phases between New Moon and about 100 or 110 degrees the model and observed ratio of DS to total flux behave similarly. For phases closer to Full Moon the model DS/tot ratio is much smaller.

That is probably because near Full Moon the halo gets closer to the DS patch where the DS is measured: In the model no halo is present so the DS brightness is not polluted until the patch is actually part of the BS – in the observations the halo moves with the lunar terminator towards the BS and becomes harder and harder to remove so that it starts to pollute the DS – even if measured in images with some of the halo removed.

In the middle column we see a fair spread in observed DS/tot vs airmass. Most of the observations are for AM < 3, while a few have even higher airmasses. In the bulk of the observations we see no filter-to-filter consistent evolution of DS/tot ratio against airmass, and conclude that there appears to be no dependence on airmass; this is good as the whole point of simultaneous observing of DS and BS is that external factors, like extinction, affect both sides identically.

In the last column we see the ratio of the DS/tot number between observations and models. The behaviour noted from the first column, above, is evident here – the DS/tot ratio in models is much smaller than in observations for phases inside 110 degrees or so and the ratio of ratios goes up accordingly. For phases between 110 or 100 degrees and New Moon we see a more constant behaviour consistent with the observation made above that model and observations behave similarly. We see, however, a consistent pattern from filter to filter – there is some ‘curvature’ with phase. The inner part of this could be due to lingering halo effects, but the outer ‘curve up’ must be due to effects in the model, not in the observations. Near New Moon it seems that the DS/tot ratio for observations grows compared to the same ratio for models – the models’ DS is not as bright as in the observations near New Moon. We note that the DS model brightness is a function both of the reflectance description of the Moon and of the Earth.

1) There is indication that halo-removal near Full Moon (phases between 0 and +/- 100 degrees) is increasingly incomplete.

2) There seems to be little or no effect of airmass on the DS/tot data.

3) There is some indication of a reflectance problem in the models for phases approaching New Moon – either in the Earth description or in the Moon.

1) is good news – we thought we could only do removal up toi half Moon – the limit seem sto be 10 or 20 degrees beyond that, towards a fuller Moon. 2) is very good news – it opens up for our method to be applied at low altitudes, i.e. for small lunar phases near New Moon.
3 should be investigated by now redoing the whole reduction but with some simple and single change in the modelling – we cannot change the BRDF for Earth (it is always Lambertian), but we can change the lunar BRDF from Hapke 63 to Lambertian.