How bad is the Drag?

During data-reduction we found the many ‘dragged images’. These are images where the shutter probably did not close before readout started. They look like this one (histogram equalized): 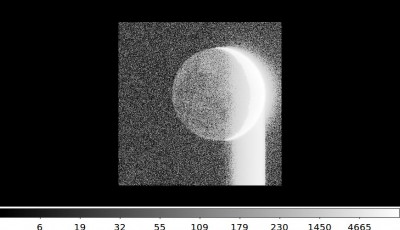 The ‘drag’ is from the BS but is probably present everywhere, but not visible from the DS. The BS has a maximum near the right hand limb where the counts are near 10000. The ‘drag’ is near 240 at most. There is no gradient in the drag along the direction of the drag: 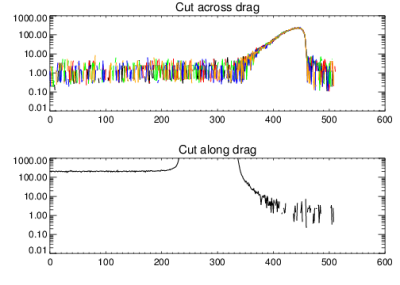 The absence of a gradient in the drag helps us understand its origins – it is the effect of constant-speed readout. The readout speed is supposedly 1e-6 s per pixel (in the image header: this may be read from the camera but could be a fixed number entered at setup ….). Reading 512×512 pixels should take 0.26 seconds. The exposure time for this image was set to 0.0274s. Being a ‘dragged image’ we have no idea if this is right.

If the shutter got into the act in mid readout the amplitude of the drag is affected by this. I think many dragged images we have seen are like the above one – dragging is seldom much worse than this.

Let us check other dragged images with higher exposures and see if the drag/BS ratio is constant or not.

The above was prompted by pondering whether we could have a ‘shutter-less’ camera. It would appear not – at least not if the drag is due to open shutter during readout. The readout would have to be 24 times faster than it is and I am not sure CCD cameras come with such fast readout. 24 MHz readout?